The people on Holme’s map were from many of the same regions as Quakers in general, even though they were not all Quaker. The evidence for origin comes from land records,especially for First Purchasers and people who sold their land while still in England, English Quaker records, certificates of removal, and a smattering of other sources.

Because of the particular records that give place of origin, we know the origin of almost all who did not immigrate. Many of them were First Purchasers. Those who immigrated appear in many records, most of which don’t show origin. This is the same pattern as for occupation.

The map shows the pattern of emigration. 1 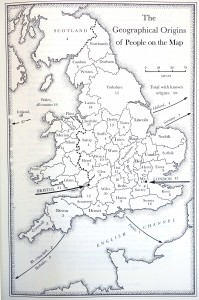 The cities of London and Bristol provide many of the people, especially the merchants. Many of the farmers and artisans came from a few counties, especially Cheshire and Wiltshire. There were few from East Anglia; that was Puritan country. 2 Some of the clusters reflect patterns of immigration. For example a cluster from Derbyshire ended up in Darby township, Delaware County. More analysis would probably show more clusters like this. And of course the Welsh predominately settled in the Welsh Tract.