If you have an early Pennsylvania ancestor, he or she might have bought their land from William Penn or from someone else. If they bought from someone else, the record will not be found in the Old Rights Index, as discussed in If your ancestor got land from William Penn. Instead the record might be found in an early deed book. There is no guarantee of this. There was a fee for recording deeds, and some people did not bother. On the other hand, land was vitally important to people, and many deeds were recorded.

The early deed books for Philadelphia city and county are available on microfilm, at the Philadelphia City Archive and at the Historical Society of Pennsylvania. To find the deed, you need to know the deed book and page. There is an online index for both grantors and grantees, unwieldy to use. James Duffin has prepared a detailed guide for using it. Once you find the deed book and page number, you can look for the text of the deed itself, either on the microfilm or online, by subscription only, at the Historical Land and Vital Records site of the Philadelphia Department of Records. Duffin’s guide covers how to use this as well.

When you find a deed, what will it tell you? Here is an early example. 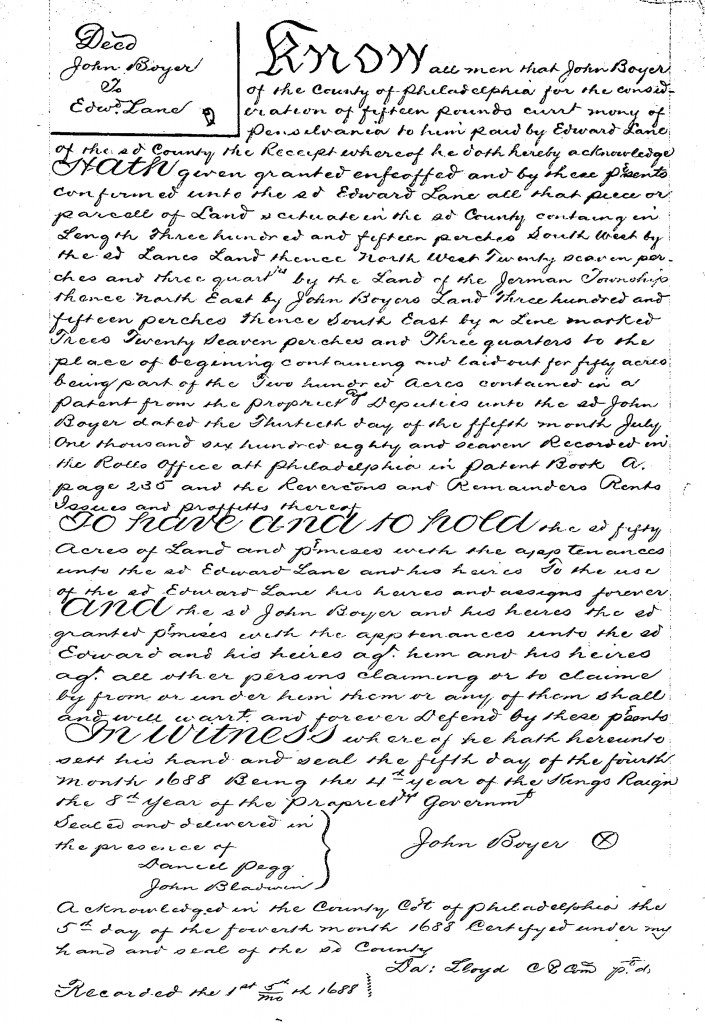 In 1688 John Bowyer (in the deed as Bower) sold a piece of his land to Edward Lane. It was a tract of 50 acres, out of Bowyer’s tract of 200 acres; Lane paid £15 pounds for it; it lay next to Germantown; Bowyer signed it on the 5th day of the 4th month in 1688; it was acknowledged in county court the same day. You can’t tell from a deed whether the grantor or grantee lived on the land, although you can tell whether it had a house or other improvements (this tract did not) since those are described in the deed if they exist. You can often find the occupation of the grantor and grantee, although not in this example. If the land was a gift, sometimes given “for love and affection”, instead for money, it suggests a family relationship.

The deed by itself may not be informative, but you can put it together with other pieces to form a picture. If you look at Thomas Holme’s county map, to the east of Germantown, you will see John Bowyer and William Lane. William was Edward’s father, a grocer of Bristol, England and a First Purchaser in 1681. William did not emigrate, but Edward emigrated and took up the family land. When Edward married Ann Allen in 7th month 1688 he was described as of Philadelphia County, suggesting that he was living on the land (rather than on his city lot). 1 The land lay in Bristol township; often the townships were named for the place in England where people came from. Lane was not the only landholder in Bristol from Bristol, but his tract, along with John Barnes’, was one of the largest in the township, so it may have gotten its name from his home place.

For Chester County, most deeds  were recorded in Philadelphia until 1714, but there were some in Chester. There is an online index for deeds to 1850 at the Chesco site. The deeds themselves are at the Chester County Archives in West Chester. A published source by Carol Bryant, Abstracts of Chester County Land Records, in two volumes, has good abstracts of deeds, including price paid, size of the tract, and names of adjoining landowners.

For Bucks County, deeds were recorded starting in 1684. The originals are on microfilm at the Bucks County Courthouse in Doylestown. The index is available at the courthouse in bound volumes. There are two published sources for abstracts of early deeds: John Davis, Bucks County Pennsylvania deed Records 1684-1763, and Charlotte Meldrum, Abstracts of Bucks County Pennsylvania Land Records 1684-1723. They cover the same transactions; Meldrum provides more details. Davis did not understand the Quaker dating system; his months are incorrect. For example, on page 3, Davis gives: “Patrick Kelley husbandman of Phila bound to Philip Conway, war master of Bucks County. Witnessed by Silas Crispin, Tryall Holme and Edmond McVagh. March 29, 1686”. This was actually on 3rd month 1686, as Meldrum indicates. And of course Conway was not a war master, but a farmer who lived in Warminster! 2 Use these abstracts with care, and refer to the originals for transactions essential to your research. 3